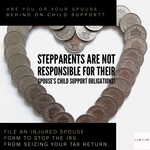 Are you or your spouse behind on child support? If so then the IRS can seize any money you were supposed to get as a tax refund and send it to your local child support enforcement agency to cover the arrears. However the stepparent can stop the IRS from taking his/her portion of the tax refund by filing an Injured Spouse Form. 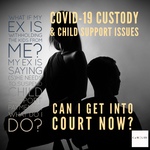 If my ex is denying me court ordered visitation / custody time because of COVID-19 can I get an emergency hearing with the court? The short answer is no. Almost every court has stopped hearing anything but emergency matters. A court is unlikely to hear it unless you have evidence that the children are in physical danger. If my ex is saying that he/she needs to suspend child support payments because of COVID-19 job loss, what are my options? The short answer is that child support is a court order, and the other parent is obligated to pay it.

Once you have a final order in the Juvenile and Domestic Relations District Court, the fight may have just begun. Both parties have the right to a de novo appeal, so long as he or she files the paperwork within 10 days of the entry of the final order and pays the filing fee for appealing. This means that each party gets a second bite at the apple, as though the first trial had not happened.

The Number One Mistake Criminal Attorneys Make With Immigration Clients

there is one area where criminal attorneys can change the way they do things and by doing so drastically benefit their clients – how we deal with first offender and/or differed dispositions.

Can I Modify My Child Support Order?

A “final” child support order is not necessarily final. Various events such as job loss, promotion, birth of another child, or a move out of state can all impact the amount you owe for child support.

Preparing to Testify In Court

Having recently gone through the experience of testifying in court as a witness for the first time myself I can honestly say it is a nerve wracking experience. Prior to this I have been in court thousands of times often standing in front of hundreds of people and while questioning witnesses and m...

Why All The New Abortion Laws?

More opportunities to uphold, restrict, or eliminate the fundamental right established by Roe v. Wade are coming to the Supreme Court later this year. Until then state lawmakers will continue their onslaught of new abortion law proposals in an attempt to get ahead of the curve, whichever way the Court swings.

Possession of THC Oil, Hash Oil, Dab Pens, and Marijuana Vape Pens are a felony in Virginia punishable by up to 10 years in jail, a $2,500 fine, a 6 months license suspension, and probation.

Mistakes to Avoid During a Custody & Visitation Trial

TOP 10 MISTAKES TO MAKE REGARDING CUSTODY AND VISITATION TRIALS 1. Don't Worry About Your Ex - Worry About the Judge There is one person to worry about in a custody and visitation case.  The judge. Avoid letting your emotions get the best of you when your ex or your ex's lawyer baits you.   Yo...

Child Custody and Relocating - Can I Move?

RELOCATION and MOVING When You Have Joint or Shared Custody of Your Child in Virginia The court can't keep me here, right?  It most certainly can.  We routinely see cases where a job brings a family to the area, the family breaks up, and the party seeking to return to their “home” is not able t...

It is important to pay traffic tickets and criminal fines and court costs on time. If you pay your fines and costs late it can have a number of negative consequences such as suspension of your driver's license, conviction of a charge that had been deferred and was set to be dismissed, and even the imposition of suspended jail time.

Drug Charges - What You Need to Know

If you have been charged with a drug offense you are not alone, they are one of the most common criminal charges judges see come in and out of their courtrooms. That being said they are also one of the most legally complex charges criminal defense attorneys face.

Paul Manafort - What Happens When A Plea Agreement Falls Apart?

Recently, the New York Times reported that the government has been released from the plea agreement with Defendant Paul Manafort. What happened, and why? And could this happen to you? There are many types of plea agreements. Paul Manafort entered into a written plea agreement in which he was to cooperate with the government and provide information that he knew. While we are not privy to the details, it is clear that he did not live up to his end of the bargain.

The Devonshire Program is held in conjunction with Fairfax County Public Schools Student Safety and Wellness Office Alcohol and Other Drug Use Suspension Intervention Seminars. Together they provide assistance to at risk students who have managed to get themselves into legal difficulty involving the use of alcohol or drugs.

Restraining Orders And Their Effect On Child Support

People are often surprised to learn that the Virginia courts have the authority to order child support for 2 years based on a hearing scheduled with a mere 15 days' notice!

Reckless driving in Virginia is a class 1 misdemeanor, meaning it is a criminal offense punishable with up to 12 months in jail and a fine of up to $2,500. Reckless driving also carries six DMV points and a potential license suspension of up to six months. Further, a reckless driving conviction stays on your Virginia DMV record for 11 years, and your criminal records for the rest of your life.

The Criminal Consequences of Restraining Orders

In Virginia, violating an Order of Protection means that you may face criminal charges (even though the PO is a civil order). Violations range from a class 1 misdemeanor to a class 6 felony, depending on the type of violation.